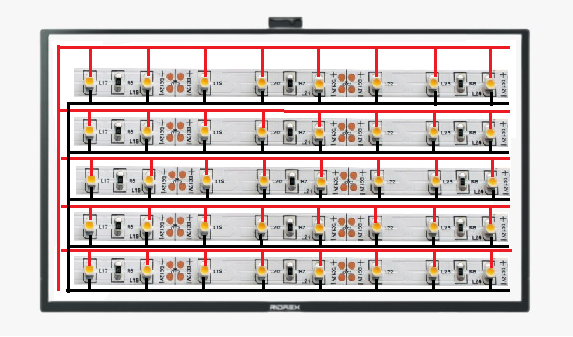 While we think to buy a new Smart Tv, we look at so many things like durability, cutting edge technology, performance, price, features, resolution effect, display, connectivity, and many more.

While thinking of durability, one thing many consumers forget is the backlight system that runs on the background of television sets.

In India, we always find a way to get our gadgets repaired in the most affordable way and quickest way.

Every LED Tv or LCD Tv is equipped with a backlight system, but most of us don't know what is backlight and what are the different types of backlights.  As well as we also have no idea what type of backlights are more durable, efficient, and easy to repair.

What is a backlight system?

A backlight system is a set of sequentially connected light-emitting diodes which illuminates the LCD display panel of a television. Please find the above image as a reference.

When it comes to electronics circuits connections. There are two types,

Yet one can think of this as a simple change, but this simple and logical change can add a significant difference in the durability of Smart Tv longer.

In the case of earlier series connections, if any one of the LEDs in the entire backlight strip gets damaged or blown out, the entire strip has to be replaced, resulting in a very higher cost of repair.

Replacing the series connections with parallel connections in the backlight system will be resulting in lesser repair costs.

In case of any damage in the backlight system in a parallel connection, the entire system will not fail as it happens in series connections. A single LED can be replaced easily and cost-effectively and can overcome the entire problem.

At Ridaex, we are replacing SDLED with PDLED, in order to give greater durability for our television and in a long time reducing the repairs, hence that directly reduces the burden on our customers.